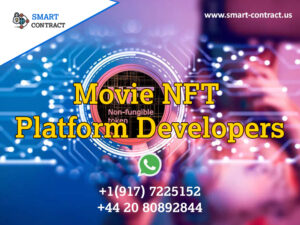 NFT standards for Non-Fungible token. These NFTs are now the biggest thing in the crypto world that digitally represents the ownership over several real-world entities like music, arts, videos, photos etc.

Now, the idea behind Film NFTs is to digitalize the diverse assets of the film business, which opens up a slew of new revenue opportunities for everyone in the sector while also providing a global reach.

NFT developers at Crypto Soft Solutions specialize in generating Non-Fungible Tokens for the Film Industry. Movie NFTs have ownership in the film based on the number of persons who own it in the film.

The holders of movie NFTs also own the film and receive a portion of the box office and streaming earnings. Costume designers, cameramen, background musicians, singers, actors, producers, and directors are among the persons who can use these Movie NFTs by staking, and those who hold these NFTs also own part ownerships in the film.

How Does NFT Transforms the Movie Merchandise?

The traditional manner of promoting a picture has achieved a whole new level since the emergence of NFTs in the film business. People in the film business can use NFT to launch a photo or video clip marketing their new film, which can then be sold for a profit at an NFT auction. Trading such a large number of entities at each stage of a film might result in a sizable profit even before the whole picture is released.

Whom Does Film NFTs Benefits?

This film NFTs benefits not only the bigwigs in the industry, but also everyone else in the industry, as well as cinema enthusiasts all over the world. The following is a list of people who would benefit from seeing NFTs.

What does NFTs Promises Film Industry?

Below mentioned are some of the major benefits that NFTs offers the film industry in the near future.

Movie NFTs will upend the global film business by allowing consumers to not only enjoy their favourite material, but also to empower a new generation of actors, directors, and writers with direct access to funding from the same movie community, allowing them to bring their film ideas to life.

Aliasgar Merchant, Tendermint’s Developer Relations Engineer, believes that NFTs have the potential to revolutionise the game design of independent films by providing the chance to weigh creative decisions.

There has been a great demand for NFT Development for the Film Industry as a result of these valuable elements given by film NFTs. If you are an investor interested in investing in the Film NFT, contact Crypto Soft Solutions a top NFT Development business. Our skilled programmers can assist you in achieving the tremendous success in the film industry that you desire.